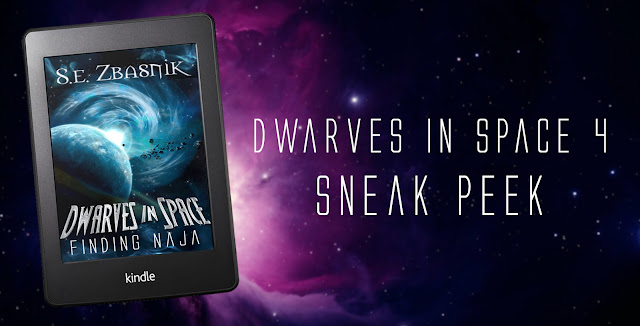 Orn’s eyes narrowed as he bumped his glove into the flat chin of the helmet, “You’re sure this isn’t part of some evil alien plan to feed us all to insect hordes?”

Variel’s eyes rolled. “What are you on about?”

“You’re never this nice,” he said, stepping back from the woman he’d worked for for over three years. A careful finger extended as the padded glove curled up. As if he were about to test the mortality of a lump of jelly, Orn poked into the captain’s side. She turned to glare at him when the embarkation’s room opened.

An elf, barely past five feet tall, stumbled in. She was half dressed in her own spacesuit. Her work overalls still poked from below the arms. A toolbox clattered to the ground as she slammed the door.
“About time,” Variel said. “I was going to toss your husband across the void.”

“Damn, I should have stopped for a chat with Monde,” Ferra said. “I wasn’t certain if this was a dual or tertiary core ship so I brought both sets of cables.” The pink eyes whipped to the dwarf still testing the captain for human-ness. “If someone hadn’t used them to string up his little doll collection I would have been here sooner.”

“You never use them,” Orn tried to explain to his wife.

“Because only centaurs and trolls are cracked enough to have a tertiary core,” Ferra bitched, notching up the boots and her gloves.

Orn shrugged up at the Captain. He knew enough to get the ship to go and generally in the right direction. All that tertiary adjunct by the MGC cooler in subspace stuff was his wife’s bread and jelly. Ferra strapped on the helmet, the lights illuminating the few wisps of white blonde hair curtaining her face. It seemed overkill to strap on a full spacesuit to jump from one ship to another but when you were a few sheets of extendable metal from deep space, you bothered.

“Do you think you can fix it?” Variel asked Ferra.

The engineer scoffed, lifting her 40 lb toolbox as if it was filled with tinker toys. “Does a gargoyle crap in the woods?”

“Actually, that’s a good question,” Orn started. But Ferra didn’t let him finish as she pushed on the big eject button. The airlock door rolled back slowly, exposing the sky blue walkway extending off the centaur’s ship.

While a chunk of gargoyle granite would look like a beauty next to the crumbling Elation-Cru, the centaur ship was something else. Designing space travel for quadrupeds took a bit more inventiveness than the old “stack them ten high and put shit on top of other shit!” The centaur ship curved around like an M.C. Esher drawing on valium. Twisting corridors opened to wide spaces and then met back up with another corridor. It was a space worthy mobius strip.

And the most surprising aspect of the centaur ship was the overuse of paint. Every species had their favorite aesthetic. Hard lines and the overuse of reds and blacks for the dwarfs. Organic loops and curls for the elves. Shimmering outlines of circuit patterns for the trolls. But only the centaurs took a look at the outside of the ship and thought it should reflect the beauty of their world.

Murals of cascading waterfalls, migrating birds, hopping grasslands, and cresting mountains coated every bulkhead. It looked like a planet caught too close to a black hole, pulled itself like taffy, wadded back up, and then took a trip through space. Centaur ships were some of the most beautiful in the galaxy and also the most impractical. Even at a complete standstill, robots still crawled along the outside, fixing up paint that cooked off or cracked from the cold of space. It was theorized a robot could spend an elf’s entire lifetime replacing every square of paint only to come to the final piece and turn back to restart once again.

And this was one of the smaller ones.

“Everyone ready?” Variel asked her helmet.

“Wait, we can refuse?” Orn said, trying to about-face in the slipping gravity. The shared artificial fields reached a half meter beyond the ship but it wavered towards the middle.

“No,” Variel answered, reaching behind to stop the retreating dwarf.

“Damn it! What good’s a pilot anyway? Hey, you’re doing a phenomenal job not flying into anything. Keep up the great no work!”

“What crawled into your tube of frosting and died?” Variel asked. Captain and pilot forever bickered worse than an old married couple. Ferra was smart and refused to rise to Orn’s whining.

“It’s disgusting. And you can’t look at it, but you can’t look away and they just stand there with this dumbstruck grin on their face as if they don’t know that they’re making you incredibly uncomfortable because it’s oh so funny!” Orn paused his tirade, taking a deep breath.

“Yeah,” he nodded, the helmet bobbing.

“Good, because we’re here,” Variel pushed on the outer doorbell.

A few beautiful chimes cascaded through the minimally oxygenated area. The door painted to mimic a rotund fuzzy animal batting at some cotton rolled back. Two centaurs bounced on their legs in an embarkation room larger than the Elation-Cru’s galley.

One bowed, and the other followed suit. Her head almost touched her front hooves she bent so low. Centaurs ran in the gamut from about 4 foot to 5 foot high, depending upon which origin world and if they started each morning with a balanced oat diet. The hair across the hooved part of the body was fine and came in varying shades of tans, whites, and blacks. People joked about seeing mythical centaurs in shades of pink but that usually meant you should check the CO2 scrubbers on your ship.
Fur stretched across the more human chest and stopped around the shoulders. There was no difference genderwise, they all had the V of hair and muscular but flat torsos. Like most of the other species across the galaxy, the only way to easily tell another gender was to be a member. Clothing was haphazard at best. Strips of satiny fabric crossed the chest in alternating layers giving a checkerboard effect but the backends of the centaurs were left uncovered.

It’s hard to put on pants when you have four legs to fight with.

“We thank you immensely for coming,” the deeply bowing centaur said as he rose up. The eyes were pulled almost back to where a human’s ears would be by a vast nose with nostrils so wide it was a wonder flies didn’t make a home inside them. Like elves, the centaurs had long ears, but they rested at the top of the head and twitched far more.

“It is our pleasure to assist,” Variel said, trying to bow herself, but the helmet caught and she nose planted into glass.

The second centaur glanced towards what had to be a mentor and said, “Please, tell us what you need and we will do it.”

“Ah…” Variel started when Ferra, impatient as always, shoved past her.

“Take me to your engines,” she ordered to the skittering thing. The centaur was shorter than the diminutive elf, and kept straining on hooves and shifting its head to look into her eyes.

“Do as she orders,” the older centaur commanded, and the young one carefully turned to the left. Once all four legs were aligned, it kicked them up racing down a twisting hallway.

“Younglings,” their greeter sighed, “I am Cepi, liaison to the Summer.”

“You named your ship the Summer?” Orn asked, disappearing beneath the vast centaur nose.

“This particular dimension of it, yes,” Cepi responded. “We do not often have royal visitors amongst us.”

Cepi shifted on his hooves, uncertain of how to accept the Dwarves classification. It would be rude to decry a guest outright despite the dignitary looking more like a common piece of space debris.
Variel shifted in her suit and the centaur mumbled, “Oh, forgive me. Yes, you may remove your walking garments. We see so few of you bipeds, I forget your customs.”

Cracking open the helmet, Variel steadied her breath but the light scents of ozone and trillum flowers were all that filled her sinuses. She looked around for a bench to set the helmet upon but the embarkation room was little more than a giant sand pit. A round quad of computer consoles claimed the middle, and a beautiful painting of a cresting sun filled the back, but otherwise, it was wide turning space.

As dignified as possible, Variel tossed her helmet on the ground and then added the bulky gloves. Orn followed suit, dropping what he could beside the captain’s pile. His signature black gloves poked into the sand and left behind a small smiley face.

“Well…” Variel started, not about to disrobe and risk weeks of dumping sand out of her spacesuit.

“Ah-yup…” Orn added, placing a foot upon his helmet in a conqueror’s pose.

Cepi blinked his elf-like eyes and twisted his head up. The chin jutted out more than a human’s but nowhere as far as the nose. Still, Variel subconsciously leaned back, afraid it was about to ram into her chest.

“So…” the dignified dignitary said, banging his hands together while everyone else did something useful. “Take me to your leader?”
Posted by Ellen Mint at 9:11 AM